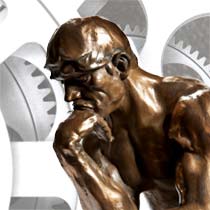 Our world is changing. Fast. Radically. To cope with this pace of evolution, or to simply avoid disruption, organizations must evolve. The Glorious Thirties, these years which embodied the Golden Age of mass production and standardized consumption, are definitely behind us, and let place to what Nilofer Merchant calls the Social Era, an age both of hyper connectivity and extreme individuality, characterized by versatility of markets and uncertainty of consumers’ behaviors. In this context, evolution is no more a choice.

In reality, evolution has always taken place, within and outside of organizations. Yet, many attempts to drive it have ended up in dead-ends. Innovative organizational principles, such as Lean or the Total Quality Management system, were led astray from their original customer-centricity (doing better to better serve customers) to enforce the bureaucratic and mechanized shortcomings of Taylorist organizations. Why?

One of our biggest mistake might have been to consider the three main poles of this evolution, people, technology and organizations, as separate factors linked by causal chains. We claimed, and believed, that novel technology would change business, which in turn would change customers, by creating more demand. Or, similarly, that new business principles would change workers’ performance, for which we will need new technology to better manage this performance. And so on. But what works in a mechanistic realm doesn’t apply in a complex world. Causes and consequences are blurred, and evolution is the result of many non-linear interdependencies which cannot be insulated. Transforming a term of the equation doesn’t ensure the propagation of this change to other components, and many organizational innovations fell short from their expected results, being trapped in causal opacity. At the light of complexity, transformation is co-evolution, which happens through the connections existing between the systems. The Taylorist organization failed and rendered itself unable to evolve, not by lack of will, but because it lost contact with employees’ creativity and customers’ expectations. Companies need to reconnect with their customers, circling back to the definition Peter Drucker gave of business: “There is only one valid definition of a business purpose: to create a customer.”

Sadly, it often seems like we don’t learn from the past. Enterprise 2.0 was primarily defined as business transformation through the use of technology. “Social” is for IBM “changing the way people connect and the way organizations succeed”, while Oracle claims that social media transforms businesses and the way they interact with customers. The present credo in «social enables the change» looks so much like another causal illusion. In a coevolutionary world, change is driven by influence, and by companies’ fitness to the global ecosystem. In other words, companies should focus on their own, intrinsic transformation to cope with today’s global mutation of business. As Ghandi once said: “If we could change ourselves, the tendencies in the world would also change.”